Being a pretty casual person when it comes to beauty and make up (I stick to what I know) it’s not something I talk about a lot. However, I’ve discovered some great new products lately, so thought it was time for my second ever round up (first one here).

Kat von D has been the name on every vegan girl’s lips lately, but her range has been only available online in the UK so far. And who wants to buy without a try? Lucky for me, Sephora, the US version of Boots (except better) does stock it in store , and while I was over in Vegas I found her counter and fell in love.

With more or less everything at around $20-$25 each it wasn’t cheap, and with the exchange rate collapsing around us it’s not getting cheaper. But I’m generally happy to pay that kind of price for the right product, and it did not disappoint.

I’ve been using a dip-brush and pot for a while now and I wasn’t sure how I felt going back to a felt pen – you don’t get the same bend if you want to go flicky or swooshy. But that’s by the by. I chose the ‘Trooper’ (black obviously), it’s super dark and most importantly… it stays put all day. You can just put a thin stroke on on top to make your lashes look a bit thicker for a daytime vibe, or go for a thick swoosh Adele style. No blotching, really even, dark pigment and totally stays put. Perfect! I wear this every day now. SO pleased.

My other find was the lip colour – I love a classic red lip ever since I was brave enough to try it. This shade was called Santa Sangre – how could I resist? It dries matt (beautiful) and is a really strong pillarbox red. My only struggle was the wand wasn’t too easy to work with, and if you got a bit out of place it’s tough to remove it. You obviously do need to touch up throughout the day here and there, but while in Disney I gave it a pretty good test – eating pineapple ice cream plus Splash mountain. And check out the results! 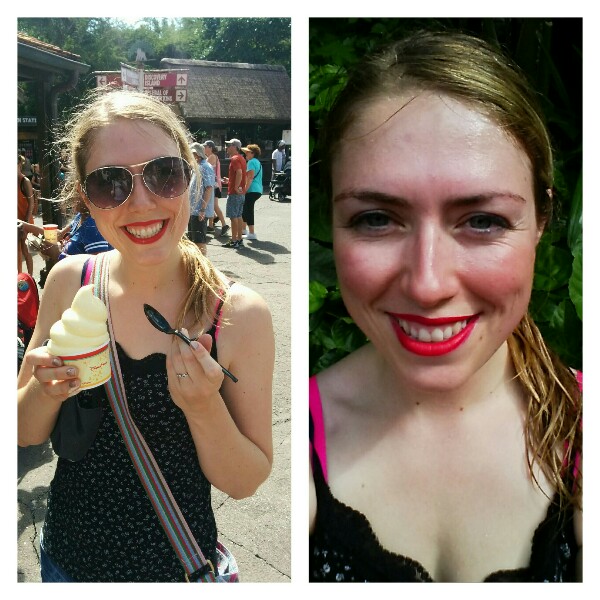 My Pixi lipstick I actually got a few months back. I was in a bad mood with my old elbow injury and a new lippy was the obvious solution. I love buying cosmetics and skincare from M&S because they usually mark everything really clearly on the site whether it’s vegan or not. However, this being an external brand, the M&S site itself isn’t so helpful, but you can find a full list of vegan products here. Not all of the Pixi range is vegan (though none is animal tested). Anyhoo, I got the Classic Red (predictably) and it’s a winner. My previous red sheer lipstick was Benefit (boo animal testing) and to be honest this is better anyway – it’s less ‘shiny’ and more pigmented. Stays on pretty well.

The other end of the cost scale is Make up Revolution. This smoky palette caught my eye while having a wander to pick up some cold and flu tablets or something in Superdrug. It was only £6 and absolutely gorgeous. It’s one of those palettes where you think you can casually throw a bit of dark grey behind your lid for a work day, then realise how pigmented the colour is and suddenly you’re full on drag queen. Which is a great problem to have. Does not feel like the price you paid. I love this – Star buy! 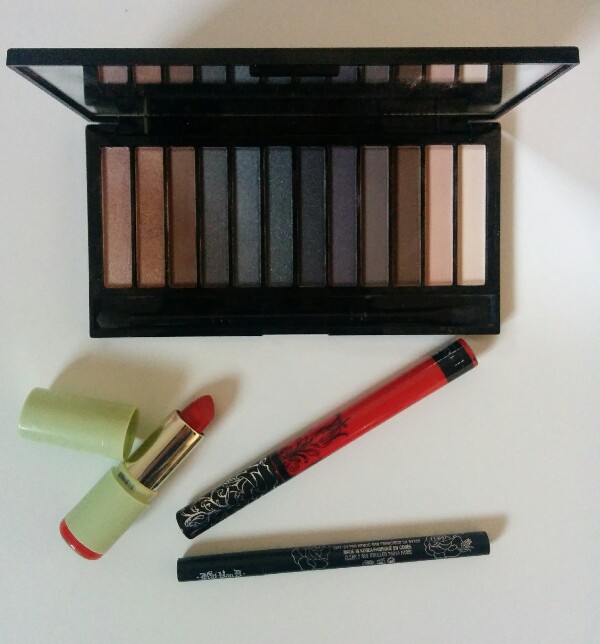 I’ve been quiet recently and with good reason (the best reason) – HOLIDAY! We spent a week in Vegas with the Dempsey clan including a sojourn to the World Pole Expo, and then the hub & I spent a second week at Disneyworld & Universal in Orlando. WOW, I hear you say, yes wow! It was so much fun, and amazing to actually take two weeks off work!

But… I hear you ask, what was it like eating vegan there? Well, it wasn’t as easy as the UK where I know what all my go-to options and back up plans for lunch and dinner are. But the worst food we had was undoubtedly on the flight. Hence the name of this post – if you’re vegan, don’t fly Thomas Cook.

**UPDATE** A little over a MONTH after my first complaint, Thomas Cook finally replied. Without saying very much at all. Skip to the end to read their response.

Lunch:
The outbound flight boarded at around 9 am. We’d already had some Jus Rol pastries at the airport waiting around (prep work bitches!) so we were feeling good as we boarded. And then at 11.45am lunch was served. A curry. I mean, out of all the gripes I’m about to list this one was pretty minor, but literally no one starves themselves before a flight because they can’t wait for the airline food. Having literally just finished breakfast, pretty much as soon as we were airborne, it was curry time. 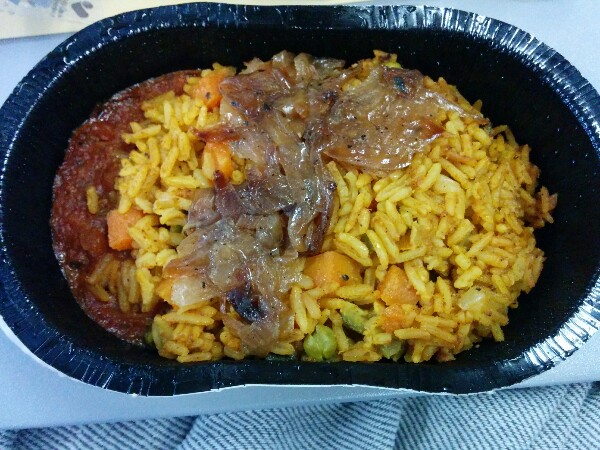 But you know what, the curry tasted good so it was an ok start. Heavy on the rice and low on the veg but flavours were decent. It was served with a side of bread and jam. And followed up with a dessert of bread and jam. That’s right kids, in one meal, we had double bread and jam.

There was also a tiny pack of raisins, the sort you’d give to a kid at school, and some marmite. Also a cracker – to spread with the jam. Or make into a cracker sandwich with the double bread, who knows. Thankfully it did also come with an apple.
Rating: 6/10

It goes downhill from here.

Tea and coffee was served: no soy milk (or anything else).
Rating: 0/10

Afternoon snack: everyone else (who’d paid the same as us) had a cornetto. Vegans – nothing.
Rating: 0/10

Afternoon tea
The omnis (meat eaters) on the flight had the classic cheese sandwich, egg sandwich, scone, clotted cream etc. The vegans received a familiar sight: double bread and jam! In case you hadn’t yet got tired of the two miniature loaves from earlier, we got two more! I couldn’t face actually eating it, and so passed the time making mini sandwiches and eating my emergency Nakd bars. 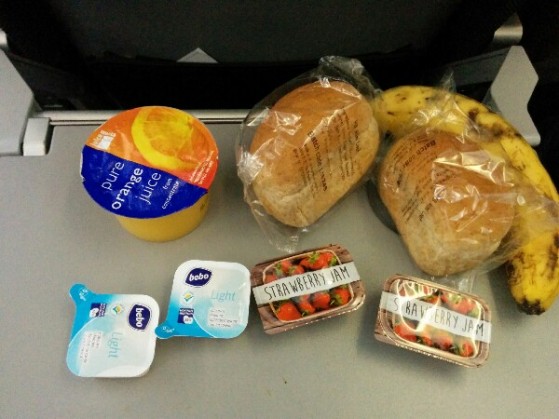 We also got a banana, yes food of the gods, but it hadn’t exactly been bubble wrapped as you’ll see from the picture. They did swap it for a better one though.
Rating: 3/10

Naturally I was feeling suspicious and apprehensive about the flight back, so loaded up on our own snacks and had a big breakfast. As soon as you’re vegan for a week you learn how to sort yourself out in anticipation of a long day. And so it turned out my cautiousness was entirely justified.

Main meal:
It was another curry. Again, heavy on the rice, but as a broccoli fiend I was relieved to get some green on my plate after two weeks in the states. Dessert and sides were bread, crackers and a fruit pot. 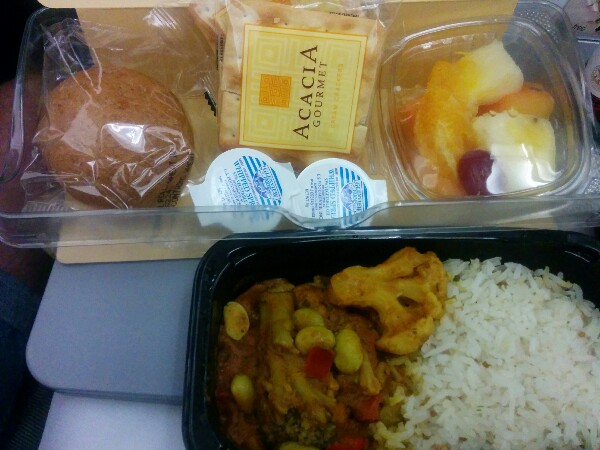 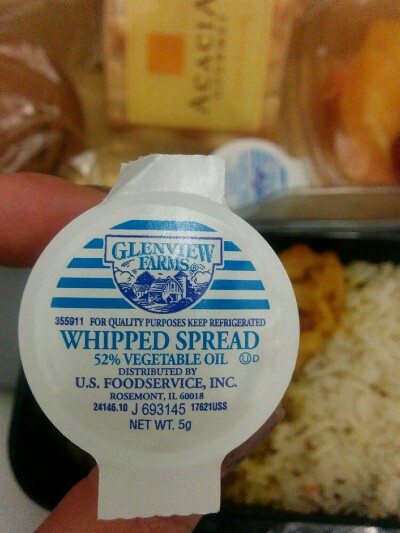 This time no jam, instead , “52% vegetable oil whipped spread”. The other 48% of the ingredients were not listed. With minimal options and the knowledge that Thomas Cook would have thrown it away anyway, I took it on faith that the spread they served me in a vegan meal would be vegan.

…then, when I got home, I contacted the manufacturer.

The first thing I spotted on the information sheet I was sent was the claim ‘lactose free’. At that point my heart sank and the rage kicked in. As any vegan (or anyone with basic ingredient and allergen knowledge, say, someone responsible for compiling in flight food at a multinational firm) would know, lactose is just one part of milk, and removing it doesn’t make a product dairy free. Apparently Thomas Cook didn’t have enough fucks to give to check this out.
Sure enough, all the way down the ingredients list, the last ingredient to be listed… was whey. FUCKING WHEY.
Rating: -10/10 for actually not being vegan.

Breakfast:
I had pretty low expectations at this point, even without yet knowing about the whey-spread. Again, it was another fail at basic veganism, as I was served an oats & honey cereal bar, another pot of fruit (sort of on the fizzy side of ripe) and some orange juice.

As soon as the steward handed me the bag, I said, ‘excuse me, this isn’t actually vegan’. Super polite. Her response: ‘Well, that’s what I’ve been given.” No apology or attempt to rectify it, or even to ask why it isn’t vegan so they get it right next time. Did not give one shit. She didn’t even look at me as she replied, it was a pretty strong brush off. Fortunately, after having been cramped in that tiny plane (don’t even get me started on the oxymoron that is ‘leg room’ on that flight) I felt so sick that I didn’t want to eat anyway. So we’re all winners aren’t we.
Rating: -15/10 for both the fact that it wasn’t vegan and for not caring that it wasn’t vegan.

The results
I contacted Thomas Cook twice with my complaints and advising then I was working on this write up, but their response time for a complaint is 28 days. So they either receive a LOT of complaints, or there’s like one person responding to them all. Either way it doesn’t look good, and after three weeks of waiting I decided I’d given them long enough. I’ll update this post if they ever do respond.

Overall, it’s a grand total of -16 points out of a possible 60. And I didn’t even deduct anything for no soy milk on the return flight either, as at this point in the game it would be like kicking a puppy. And that wouldn’t be very vegan.

Thanks for getting in touch us about your holiday to Florida. I’m sorry you didn’t enjoy your in-flight meals.
We work hard to offer a choice of food for you to enjoy and offer meals to suit all tastes but it is hard to find options for everyone to enjoy. Considering the number of customers that fly with us and the feedback we’ve received about our meals, I’m sorry these were not to your liking.

We want you to know how much we value your feedback and we’re really sorry you weren’t happy.
We hope you continue to travel with us and will use your feedback to improve the service we offer our customers.

No apology for THE FOOD NOT EVEN BEING VEGAN.

No apology for zero help from the steward.

I’ve naturally kicked off at them again but they just don’t care enough to reply. Imagine if they hurt your child or lost your luggage or something – it’s literally the slowest and least arsed “customer service” I’ve experienced in my life.