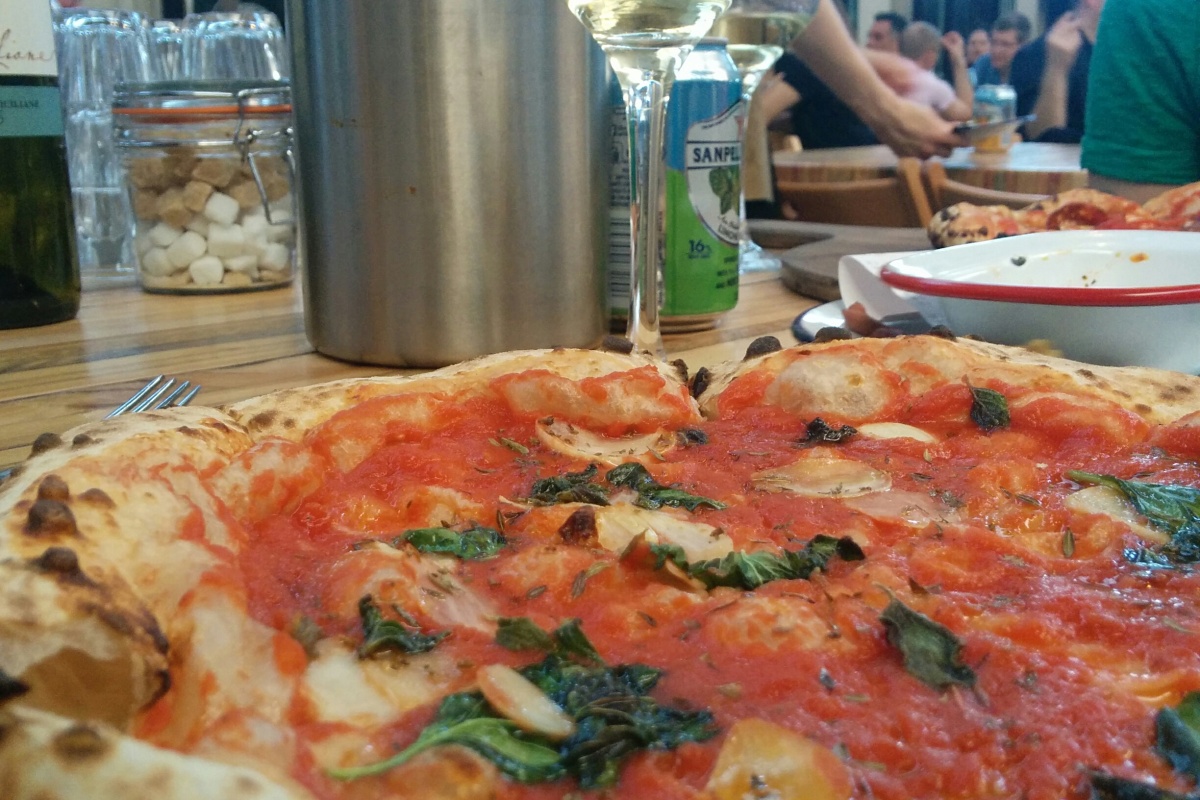 One of the reasons I didn’t go vegan sooner was because I love pizza. That perfect combination of cheese, tomato, basil and bread – my mouth is watering right now. When me & the hub moved in together back in the middle ages (2009) we had to implement a ‘one pizza a week’ rule as we both started piling on the pounds.

Anyway – I’m not a fan of many vegan cheeses, but it turns out you can have delicious, morish, never-want-that-slice-to-end pizzas even as a vegan. And amazingly, Manchester is home to many authentic and highly regarded pizza places (as well as great vegan friendly non-pizza places). I’ve made it my mission to sample as many as possible just to report back to you, beautiful readers #NotAllHeroesWearCapes.

If you’re a pizza fan, you’ll have at least heard of Rudy’s. Located in the middle of nowhere (or 10 minutes away from Pie&Ale) you need a brazen heart and willing stomach to venture that far. No, I’m kidding, it’s fine, you can make it, I believe in you. They have a genuine vegan option on the menu (Marinara) and they were happy for us to customise it, adding some bad ass broccoli. Service was very much on the slow side, but the pizza is amazing. Crust is thin & chewy, sauce is rich & flavourful. The venue feels like some guys found an abandoned building and threw a pizza oven in it – there’s some random graffiti on the walls here & there and the layout is a bit odd like it’s a short term pop up. We can only pray that it stays. Also they serve San Pellegrino orange & lemon as well as the usual alcohols. 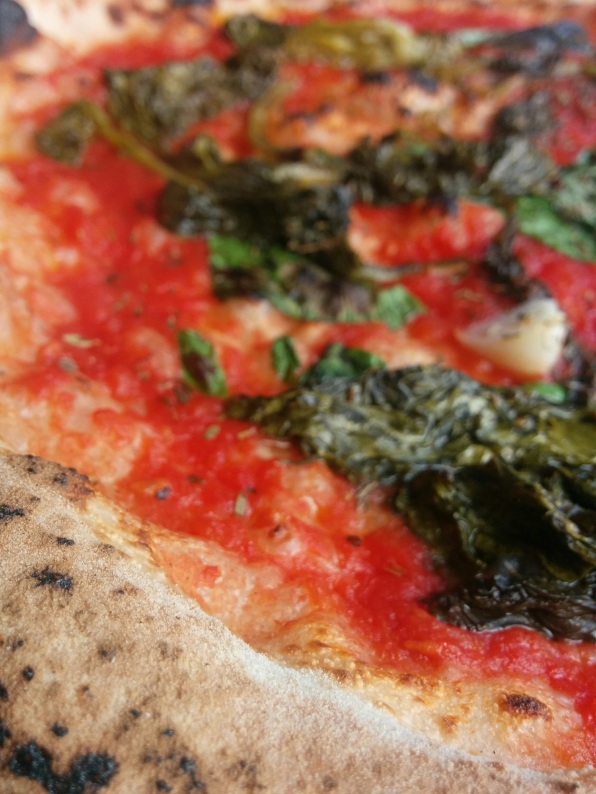 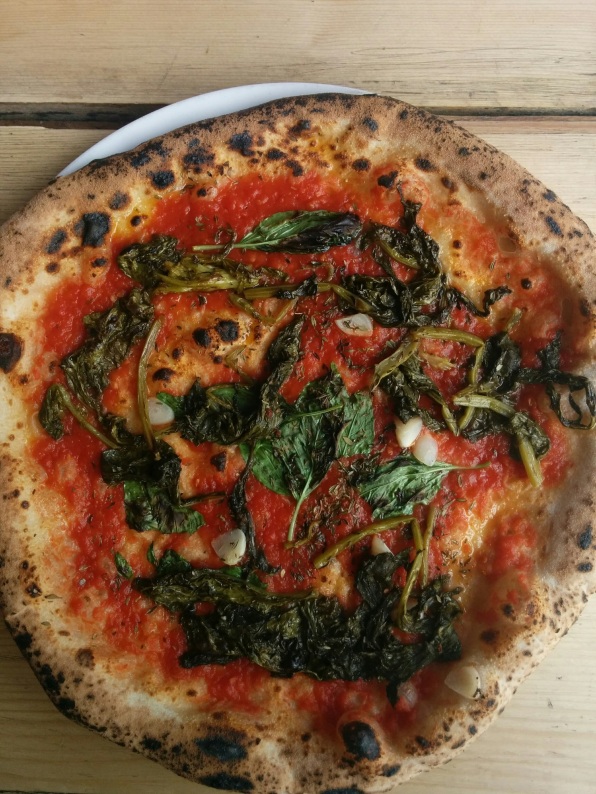 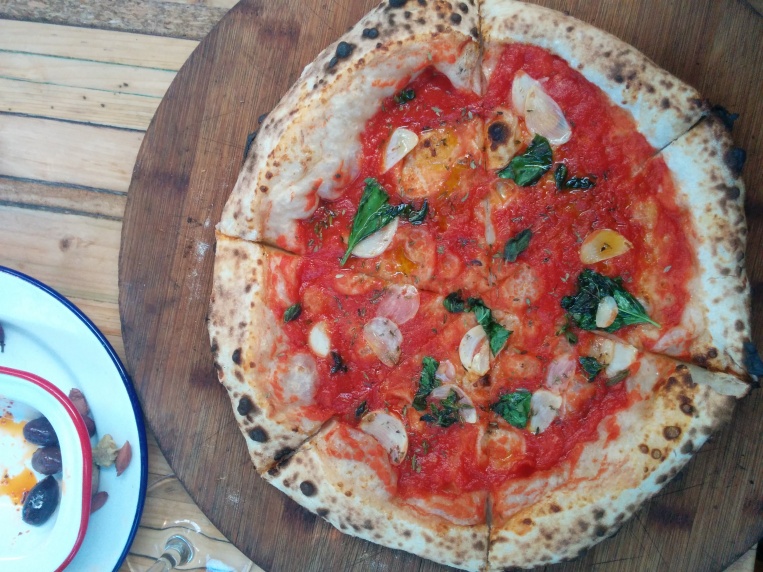 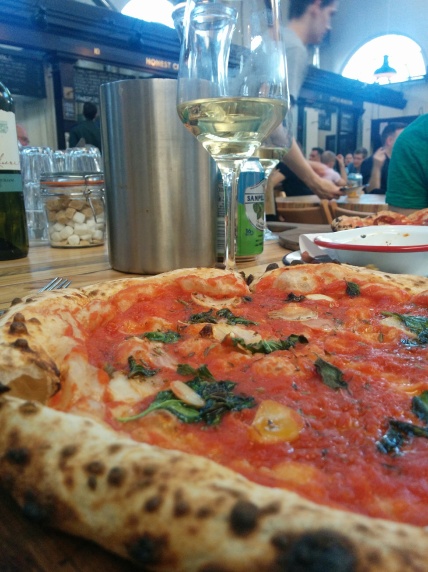 If you were scared if venturing to Rudy’s you’re going to struggle with this one. However, the standard Manchester pizza debate is Honest Crust vs Rudy’s so if you visit one you’re sort of legally obliged to visit the other if you ever want to be a real Mancunian. Located in Altrincham market, they also have the Marinara as a ready made vegan option. They recommend I didn’t add any extra toppings, as ‘the beauty is in the simplicity’. How could I go against such advice. It took a while to come as Alty market is super hot right now and everyone who goes wants a pizza, so their little oven was on a backlog. We kept ourselves busy with some big fat olives in the meantime. When the pizza itself came it had really thin slices of garlic nestled in the sauce which was delicious. And obviously, the crust and base were perfect, thin and chewy. Honest Crust is in the middle of Alty market so you’ve got loads of wine & beer options there. Bonus points as I saw Sally Webster from Corrie there, so definitely worth the schlep on the metrolink.
Honest Crust 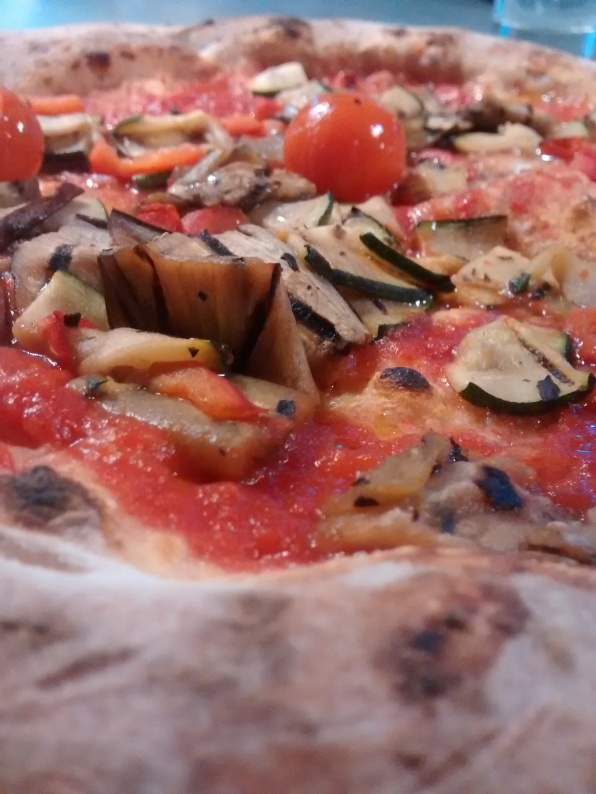 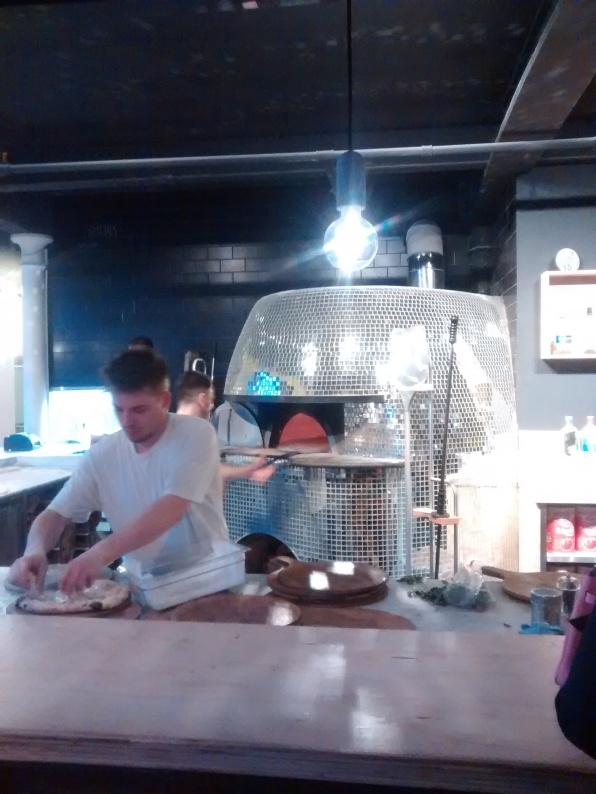 You may or may not have heard of Ply. It’s got a really cool, but unexpected vibe. It feels a bit like you’re hanging around a shop at first, very modern and design-led. It has long Bier Hall style tables that you just crowd in on, and a variety of US craft beers, such as Samuel Adams. There’s a glitterball-styled stone oven sat behind the bar like the most normal thing in the world. We went on a busy Friday about 9pm and received our pizza relatively quickly. There’s no specific vegan option, but I asked for the Roast Vegetables (tomato, red pepper, courgette, aubergine) without mozzarella and they handled it like the simple request that it is. If you’re quick to join the membership programme, you can claim 50% off pizzas until the end of June (Go – Now!)
Ply

Dough is a great place to eat. They let you book in large groups, it’s next door and sort of related to Apotheca for delicious cocktails, and they’re super accommodating for any dietary needs. Out of all the places on this list, they’re the only venue that actually offers vegan cheese on your pizza which is an incredible breakthrough.
Unfortunately, vegan cheese isn’t that great (the No-Muh piquant is the only one I’ve bought more than once). And considering that the name of the restaurant is Dough – the pizza bases just don’t compare when you’ve got Honest Crust and Rudy’s in the same round up. They’re fine, much better than anything frozen you’ll find, but it’s a much ‘breadier’ base than a chewy base, if that makes sense. I go for the Goat’s Cheese without the cheese which sounds odd, but I’m a sucker for caramelised onion and tomato tapenade. In addition, they do a vegan sorbet as a dessert, so they’re the only local venue on this list that can do you a pudding too. Also, they have a crazy varied list of pizza toppings so any meat eaters you’re with will be suitably entertained with that rather than delivering 500 questions about why don’t you just have proper cheese. (Short answer: because I’m not a calf).
Dough Pizza Kitchen

I’ve got to include Pizza Express as they’ve made the effort of adding a specific vegan pizza on the menu – the Pianta. Unlike the local options, it comes with loads of veg as toppings including spinach, mushroom, pine nuts, artichoke, tomato, rocket and finished off with garlic oil. I LOVE that they have made the effort and they also include lots of gluten free options for celiacs and people-who-suddenly-avoid-gluten-because-they-think-it’s-cool. It’s fine, it’s nice, and there’s almost always an offer on, and at the end of the day Pizza Express aren’t pretending to be the leaders in pizza. Or maybe they are, but no-one believes them. Anyway, I kick-started mine with some dough balls, you can easily swap the garlic butter for oil&balsamic, or even a tomato/olive tapenade thing. ALso, the raspberry sorbet is vegan too.
Pizza Express

Honourable mention because they also just launched a vegan pizza but I haven’t tried it yet.
Zizzi

If you’ve made it to the bottom of this list: Congrats! You are a hardcore pizza fan! All your friends love you and your life will be successful and full of glory.

If there’s anywhere I’ve missed that you think deserves a mention please so let me know, always happy to investigate new pizza discoveries!

Edit: This post previously had a review of No1 Watson Street, who have since confirmed that their pizza dough contains milk. 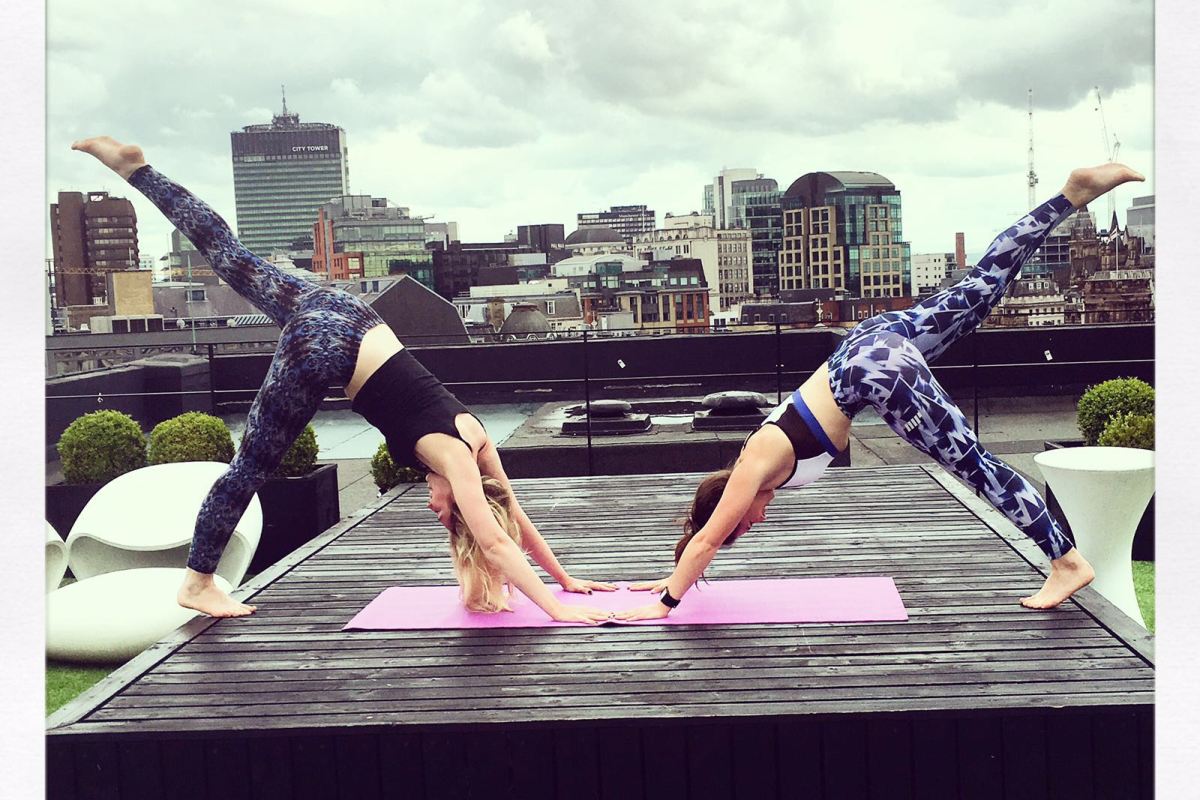 Yesterday was International Day of Yoga! Yogis from all over the world bent and breathed in public places to celebrate this amazing activity.

I started yoga to improve flexibility for my pole fitness. As well as this, I’ve found improvements in core strength (when you’re wobbling about in a wide Warrior pose it’s surprisingly abs-strengthy) and I’ve also found it helps practise Mindfulness – shocker. My favourite move for this is tree pose, standing on one leg, perfectly still, arms above your head, it requires so much concentration you forget about what you’re having for tea or what you did at work today. It completely clears the head.

Becoming more aware of your body, or every toe and every little ligament and sinew puts you more in touch with you as a full body, and less of a head attached to a body. That’s a weird thing to think about but I read a study that said people who think  in that way are happier. It brings more self awareness, more self love. The pictures above are from a long weekend in Snowdonia we just took to celebrate the hub finishing his PhD thesis. As well as these photos taken when out and about, I took a few moments to practise yogic breathing barefoot in the grass in our campsite in the early morning with noone around except for birds and bunnies. It was so peaceful.

My normal yoga practise is on Mondays at Loveday Yoga, but in the name of Yoga Day, my colleague Katie and I took a cheeky trip up to our roof garden to take some pictures! 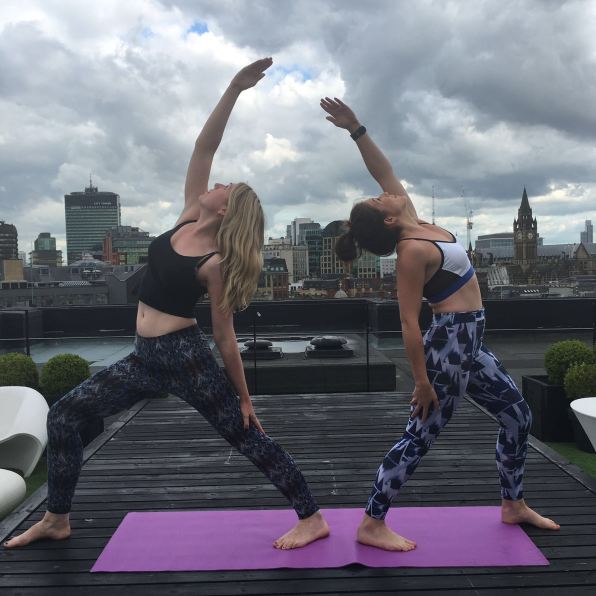 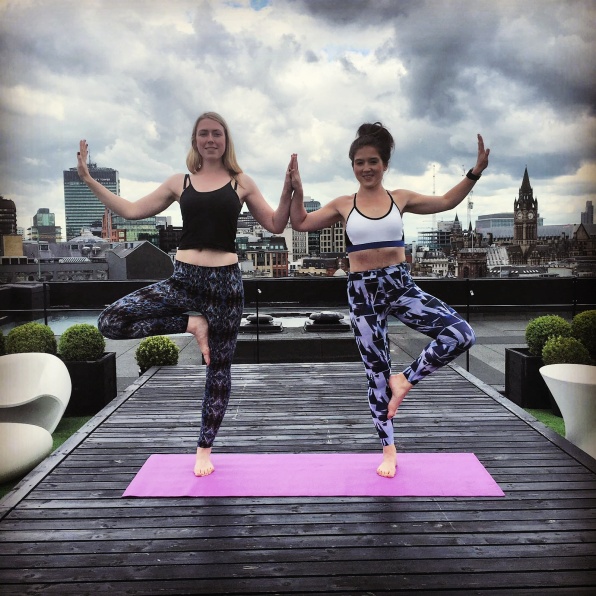 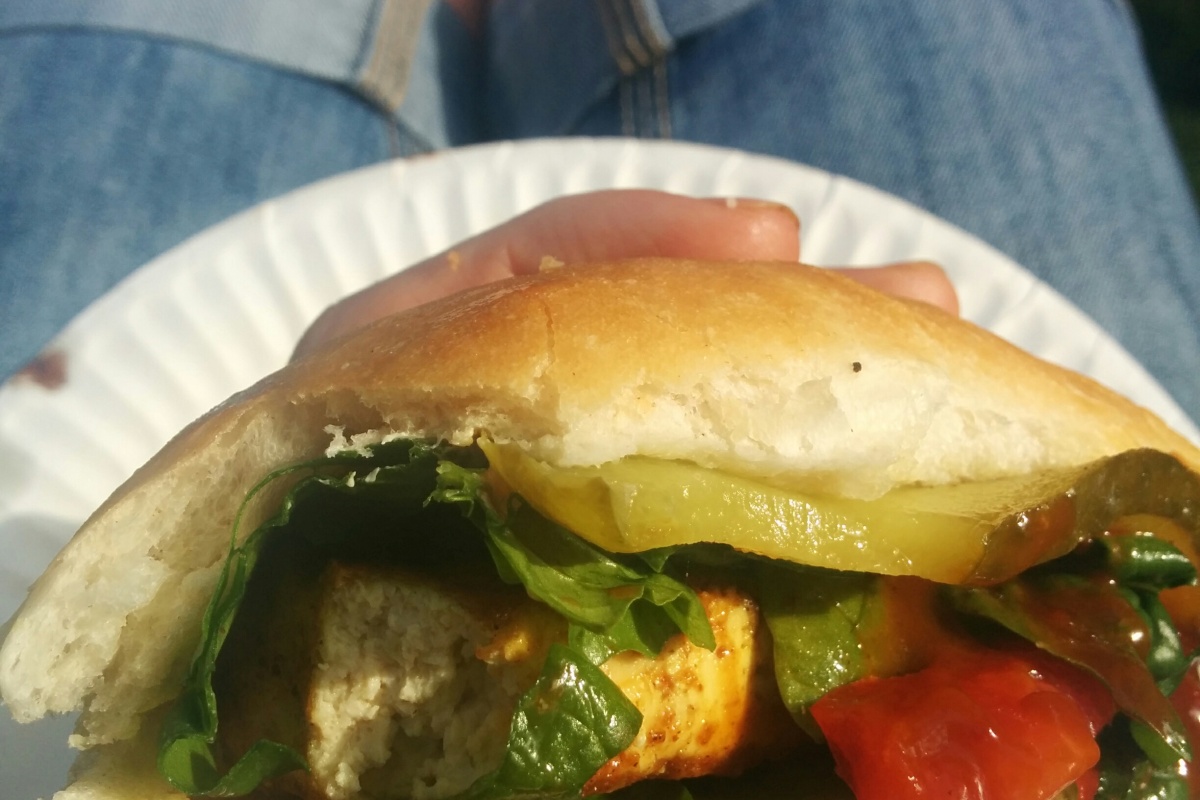 I fucking love summer. I can’t get enough of being outdoors, sitting on the grass barefoot drinking gin & tonics. Lighting  a fire when it gets late and an English chill sets in. Part of our quintessential English summer is the BBQ – getting friends and family together over the mutual burning of food. When I was veggie I ate a lot of grilled halloumi, leek & cheese sausages etc. So as this latest heatwave set in it left me thinking – could I still do BBQs? Was I doomed to grilled peppers over and over again? What do vegans eat at BBQs? Don’t worry – turns out it’s fine! Last weekend we had our first BBQ of the summer and I was in heaven. Here’s my menu:

I spent years getting tofu wrong. You have to treat it well to get a good result. This is a really simple option that should be beautiful as long as you don’t skimp on the golden rule of tofu – drain well.

This is dead easy but needs a bit of prep work – do this early in the day and then you’re laughing later on.

Again, doing these in advance is key. 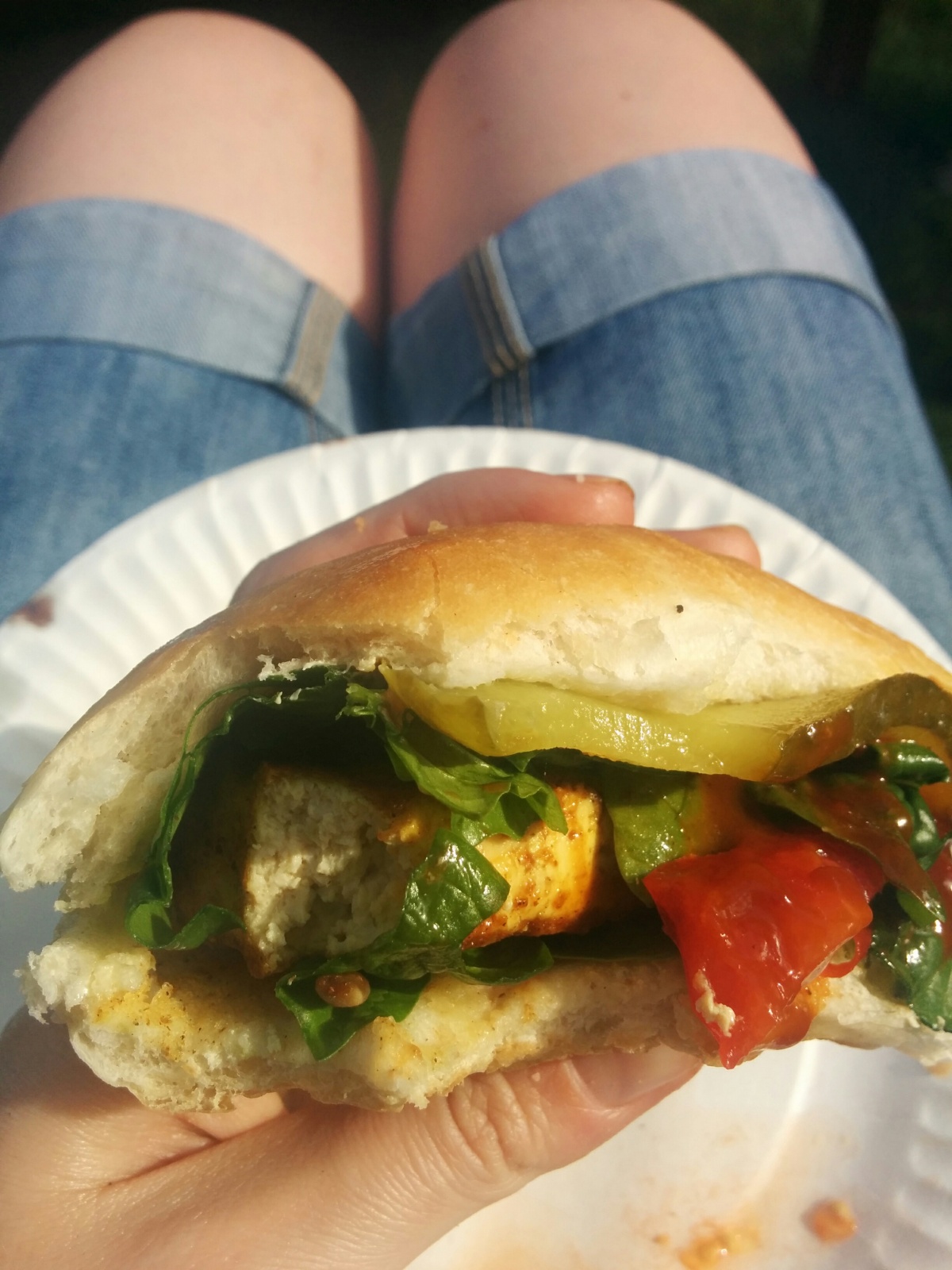 Pile your tofu and aubergine into bread buns with spinach, sliced beef tomatoes, ghurkins, grilled peppers, mustard and whatever else you fancy. 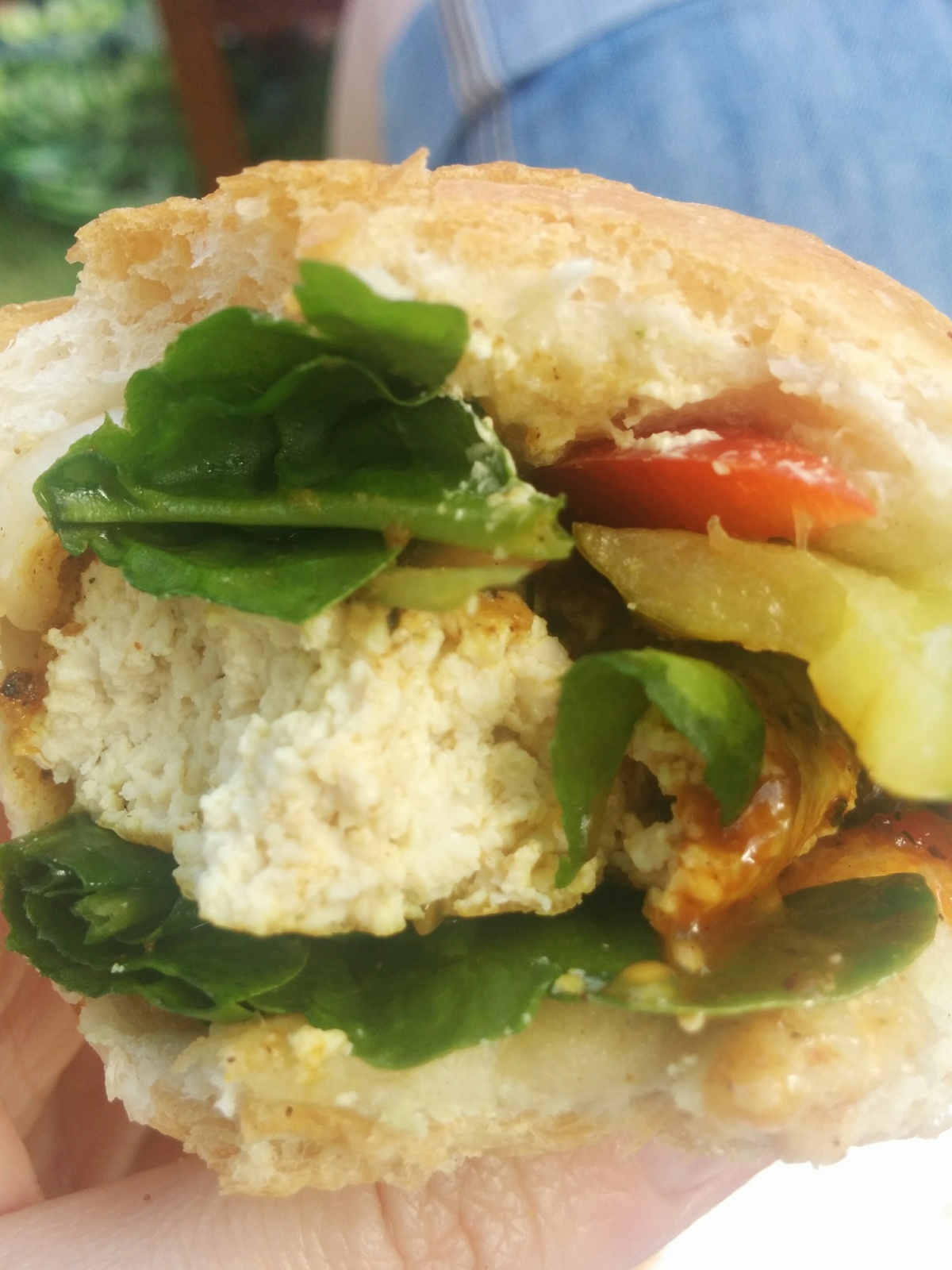 Dear readers, I saved the best til last. Also this isn’t my recipe, it’s Mr Jamie Oliver’s so I can’t take credit. Follow steps 1-4 of his basic bread recipe here, then adapt for the BBQ here. I just coated in garlic oil all over, he does something with olive oil and rosemary which does sound good. 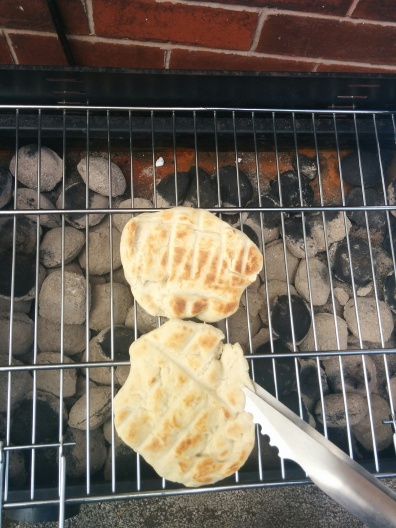 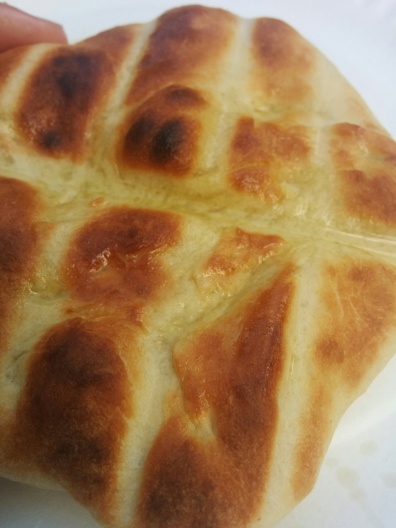 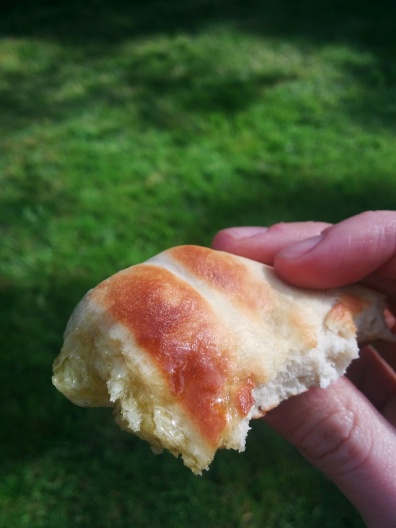 Can’t wait for more BBQ experiments this summer! To finish off here’s my easy sangria  – one part red (vegan) wine, one part lemonade, lots of ice, a few shots of brandy, strawberries, lime and apples 🙂