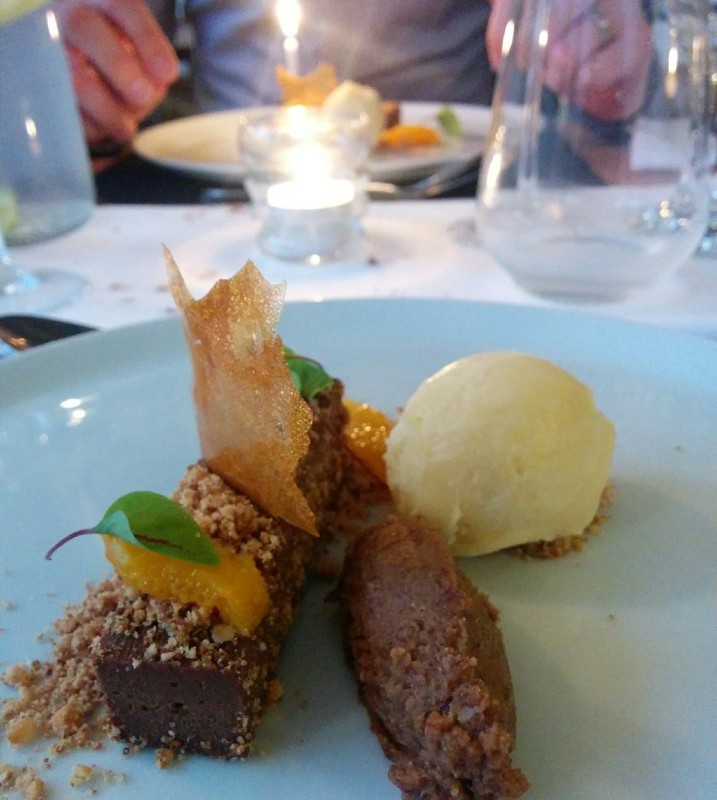 Although Stockport is minutes away from Manchester, I’m not very good at breaking the routine and going somewhere new. Last time I head that way was the Robinson’s brewery tour (well worth it) a few years ago. This time it was The Allotment that brought me back, teased by the the chef, Matthew Nutter’s, bold claim that “I can make aubergine taste better than steak“.  I’m not particularly looking for something that tastes like steak but I love the cheek of that statement.

We went for the £25 set menu – which consists of three “official” courses, plus amouse bouche and a pre dessert. So basically 5 courses for £25. It’s also BYOB – £5 per table for whatever you bring.

Our first taster was cauliflower tempura in harissa. Not only did it look beautiful, but it tasted sensational. It was a fairly mild harissa, a very crunchy tempura batter and the cauliflower inside was chewy – it felt similar to a chicken wing, but that may have just been because the chef is also known for cauliflower hot wings, and I had them on my brain.

Our official starter was smoked beets, consisting of wood-smoked beetroot carpaccio; fermented dill & horseradish yoghurt and crispy capers. To be honest, I’m not a fine-diner typically and I didn’t know what a carpaccio was (still not 100% sure). Anyway – it looked massively impressive. Too often a vegan option at a restaurant is three falafel dumped on a pile of depressed looking soggy leaves with a bit of bland cous cous for luck – it felt really special to eat somewhere where this much care and attention goes into presentation as well as the food. To be honest, I’ve eaten really well lately.

Something on this plate is a carpaccio

Smoked beets and lots of things

The main intrigued me – coq au vin. Having gone vegetarian at 14 and following more of a pizza-and-potato-wedges type diet well into my teens, there’s a lot of meat-based dishes I’ve literally never tried. I remember having a veggie beef wellington at Green’s in Didsbury and people asking if it was anything like the meaty version, but I had no point of reference to compare it to. My husband has eaten meat more recently than me, and had, shall we say, a broader palette than me as a kid. His official verdict on the cauliflower coq au vin was how the heck you get anything vegetable-based to have that sticky, chewy texture of chicken skin (when he said that I was glad I had no point of reference as it sounds a bit gross!) In real life it was great though, and the answer was rice paper. Here is the menu’s description: Cauliflower roasted in rice paper, basted with a sweet baby shallot & Madeira jus; braised fennel and thyme-roasted celeriac; sautéed pine nut & sage emulsion.

Delicious, amirite. We also had cheesy chips on the side just because we could – highly recommended.

But the best was still yet to come. Before our dessert came, we were served a pre-dessert of orange and liquorice chocolate truffles. I’m not a big fan of liqourice so it’s never something I’d have picked off the menu – but the slight bitterness of the liqourice offset the sweetness of the chocolate just enough so that it felt less sickly than a typical chocolate truffle – they were amazing.

Next up – actual dessert: Salted caramel chocolate: Rich chocolate and hazelnut parfait; orange & rum sorbet; raisin cream. When booking the table we’d told them in advance we were celebrating a birthday, so they brought out one of the desserts with a little candle in – such a sweet touch. I am a HUGE fan of salted caramel, and chocolate, basically anything rich and sweet. This did not disappoint. 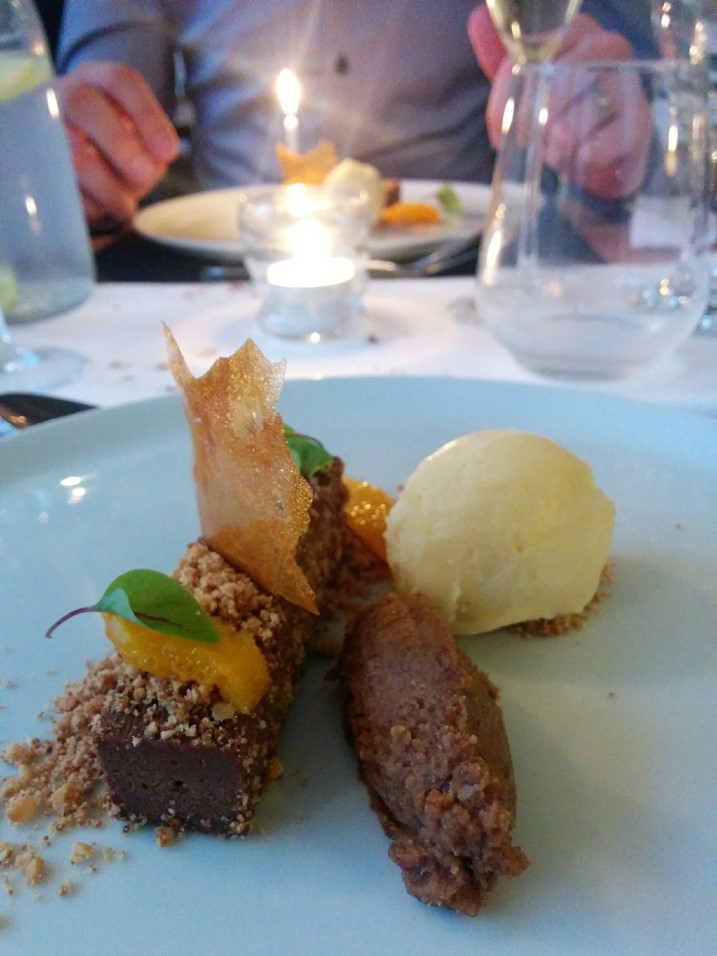 We were stuffed at this point, but we still had red wine left, and the idea of a vegan cheeseboard was too awesome to say no to. So we added a cheeseboard for two (£17) on at the end of our FIVE COURSES. I was absolutely blown away. Rather than concentrate on getting the texture of cheese, they just went for flavour – the correct decision. So all the cheeses were quite soft and quite similar to each other in consistency, but the taste… oh the taste. Like a lot of people, giving up cheese was what put me off most about being vegan (once I read more about the dairy industry it was pretty easy in the end, but the love of cheese was what put me off doing that research in the first place).

Awkwardly, it’s now been a couple of weeks since our visit and I can’t quite remember the details of each cheese, just the cheese-induced dream-like state that it sent me into. One was macadamia based, one was cashew and once was possibly almond. One was very smokey, one was very fresh. I imagine that they’ll change regularly so all I can say is go go go. My only criticism was we got through those crackers way too fast which left me just eating the cheese of my fork – I had no shame.

All of this fine dining takes place in a small, unimposing restaurant round the corner from Stockport market.  To look from the outside you’d have no idea at the quality and creativity of what is being served there, it looks like just a chill, casual restaurant, with some plants and garden tools around creating an allotment-themed vibe. I sincerely regret not having visited there sooner, and will 100% be back for the summer menu. I’ve already prattled on about it to pretty much every vegan I know and will continue to do so. Even for non-vegans – the food stands up for itself, it’s no substitute, second-thought or making-do like a lot of meat free options, and it’s great value.

4 thoughts on “Dinner at the Allotment vegan restaurant in Stockport”