We’re very lucky in Manchester to have some amazing vegan options, some healthy, some not so healthy. I’m in my fourth month of vegan-ing and I’ve not struggled too badly anywhere. I thought I’d share some of the amazing finds I’ve had around the city lately:

Pho have places all over the country, the Manchester branch is located in the Corn Exchange (previously the Triangle, and previously a bit crap). Pho are great because they declare pretty openly that virtually all their vegetarian labled dishes are also vegan, rather than hiding it away on a secret menu, and when queried the server I had was ready to answer vegan questions.

I had the bun chay hoey – hot and spicy noodle soup. You get the main soup in one giant bowl, the vegan option being tofu and mushroom, and a tray of fresh ingredients on the side to add as you like – lemongrass, coriander, beans sprouts, lime and mint. I’m normally pretty good with spicy things, and I optimistically added all the chillis I was given. A bit of a ‘nose runner’ shall we say. 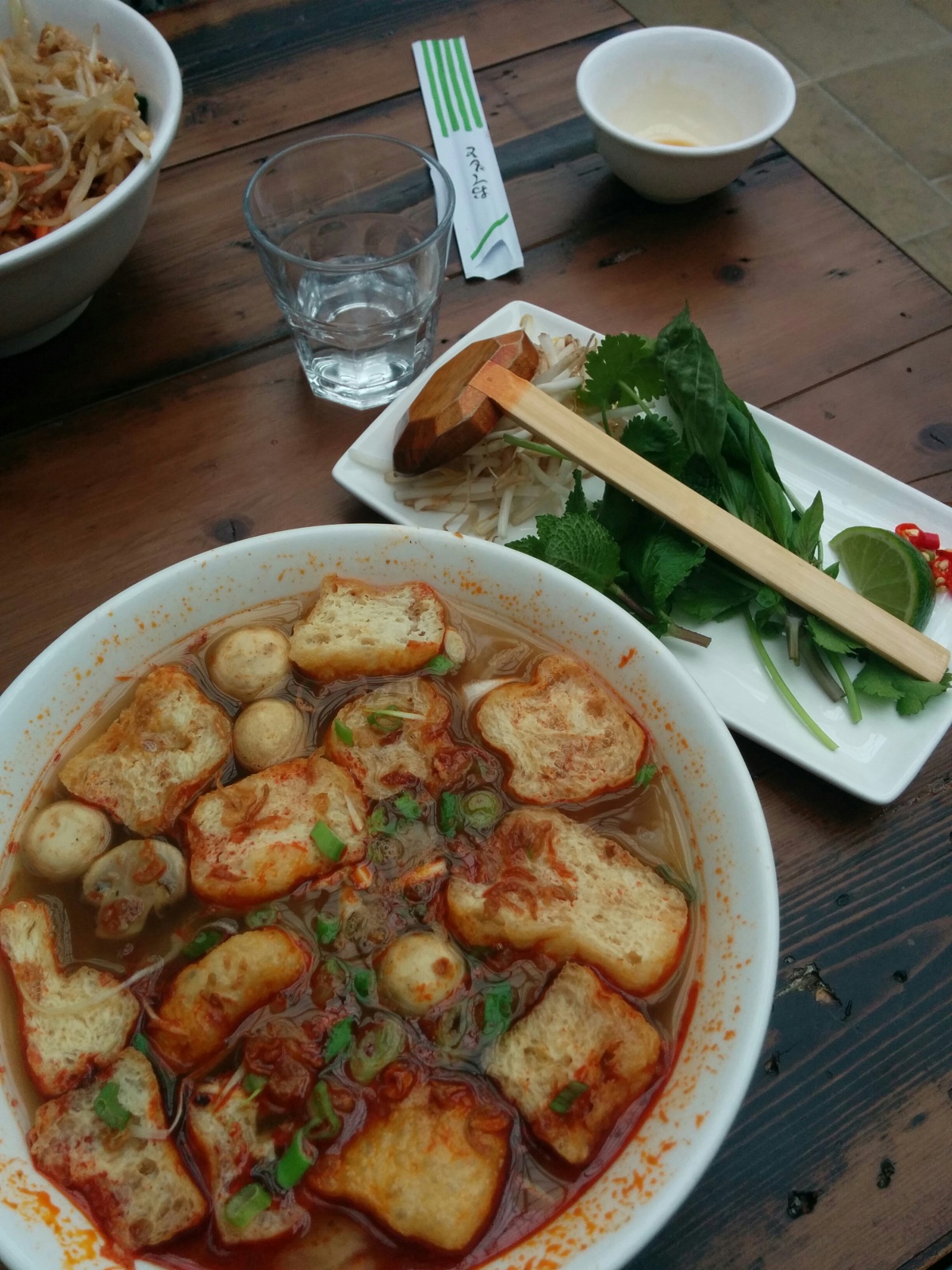 The tofu wasn’t a texture I’d had before, to be honest, it reminded me of croutons, sort of ‘bready’. In spite of this surprise,  it was delicious and I’d definitely have it again.

Evelyn’s is in the Northern Quarter, on Tib St. It has a pretty varied menu for meat eaters, and TWO vegan options. Apparently it’s a great breakfast/brunch spot, but it did appear quite egg-centric (not even a pun).

Another day, another new tofu format, this time breadcrumbed. It was amazing, pretty sure it was silken tofu as the inside was very soft and smooth, and the breadcrumbs were really crispy, what a contrast. Served with loads of spinach and blackened cauliflower, on sort of lentil Dahl thing. It was incredible. I could have eaten it twice, which I guess makes portion size the only slight negative. 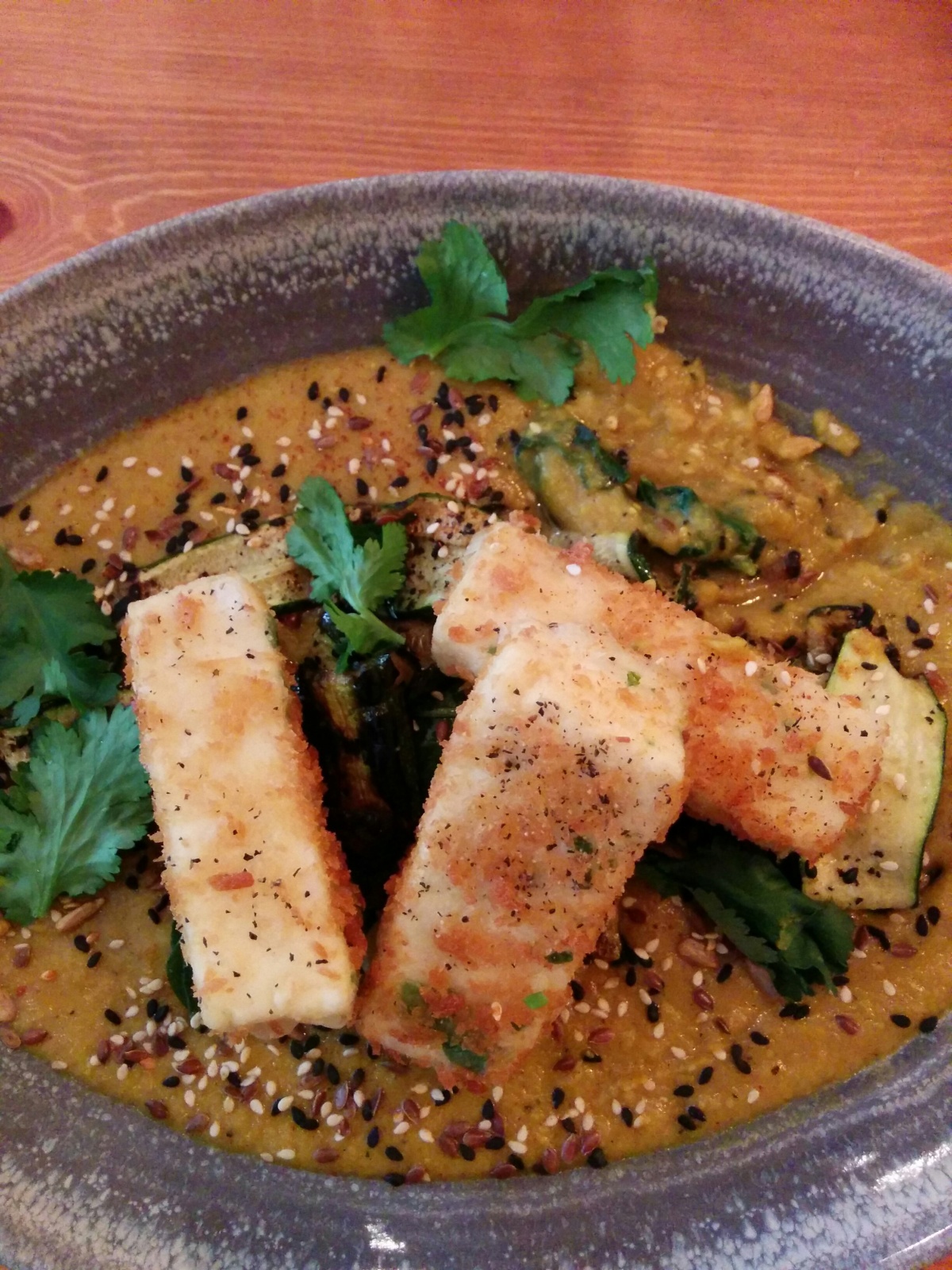 Go Falafel is like vegan Greg’s. It’s fast, it’s delicious… Oh no wait, except that it’s incredibly healthy rather than greasy beige. There are rumours that a new one is opening on Deansgate which would be amazing, the current one is just off Piccadilly gardens. They serve all sorts of fruit smoothies too. Entirely vegan. 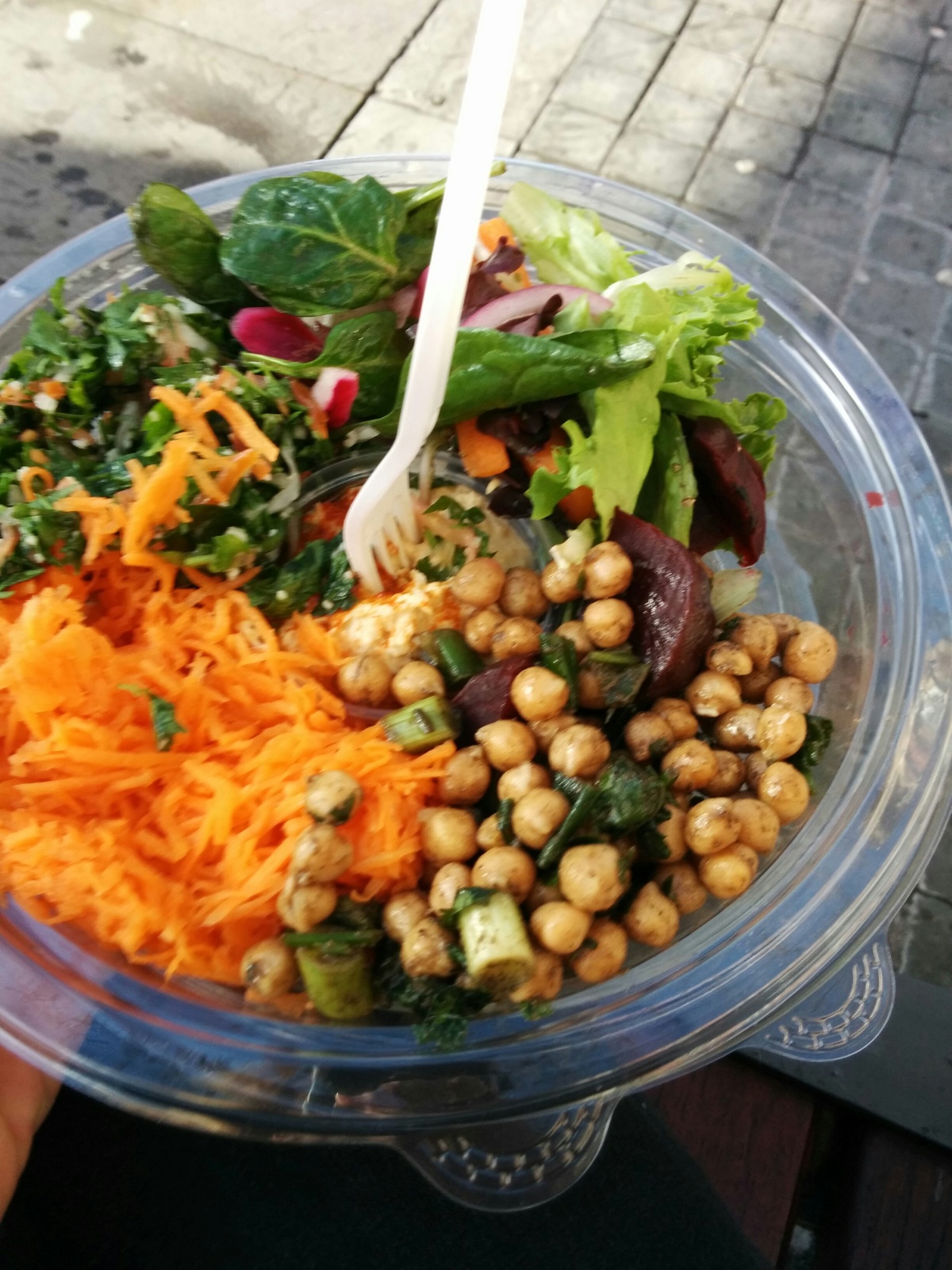 You’ll notice there’s something missing in the salad bowl above. I was actually not too hungry so I just went for the salad bowl rather than any actual falafel. But look at it, it’s beautiful. I ate this on my own on a bench on a sunny day I’m February listening to a guy play guitar. Highly recommend that ambience.

Deaf Institute has snook in a bit here as the meal I had was a special rather than on their normal menu. However, it was one of those sandwiches you think about for days afterwards so I couldn’t leave it out. Maybe if we all go and demand it they’ll make it regular.

This sandwich had the three As – avocado, artichoke and aubergine. Plus loads of red onion and grilled peppers. So fit. Look at the size of it. Needs a wooden stake to hold it together.

I’ve been telling everyone I know about Cowherds.Unfortunately I keep getting overwhelmed by the glory of their food and eating it before I can take a pic. They have a regular daily hit food item (Mondays are Thai green curry – try it) plus various snacks and All The Juices. I actually won one of their regular Facebook competitions a few weeks back and got 12 bottles of juices, and I never felt healthier. The green one below looks like pondwater yes, but it’s cut with apple besides all the kale, spinach and whatever else so tastes amazing. The orange one is ginger and carrot – if you weren’t a big fan of ginger I’d say it’s not the juice for you. It’s a great lick you up though!

Cowherds also serve Tyler & Hall chocolate vegan protein brownies – you would think that being vegan and protein heavy they’d taste like crap but you’d be SO WRONG. They’re so rich, almost like praline. Highly recommended. 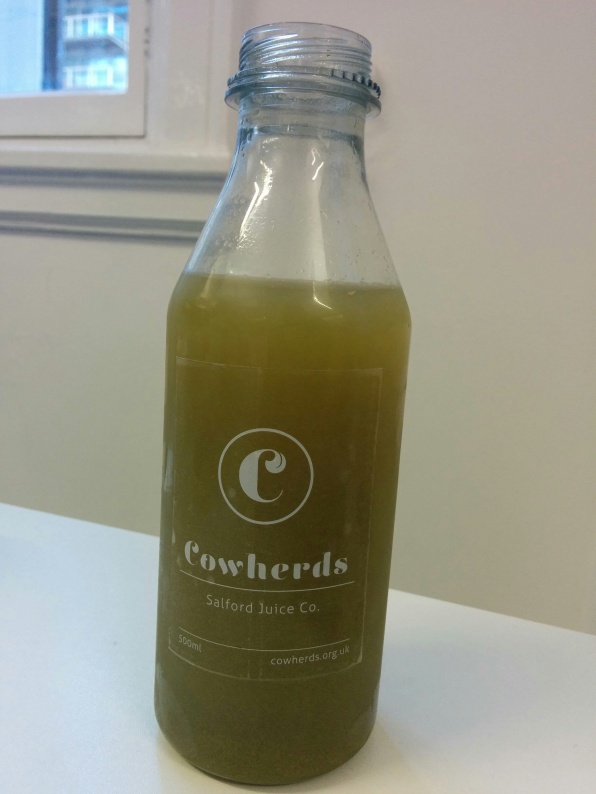 Cowherds is currently just a van behind the cathedral, but they’re imminently getting a new portakabin type thing where you can also sit inside. They do a lot of community work too and are generally wonderful people.

That’s today’s round up complete – please do let me know of anything else you discover!